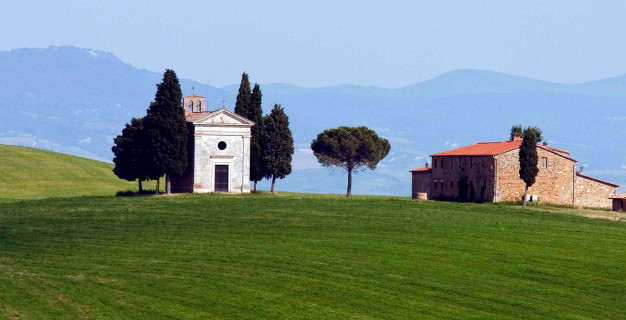 The Via Francigena is a medieval pilgrim trail and Cultural Route of the Council of Europe between the cathedral town of Canterbury, UK and the tombs of the two Apostles, Peter and Paul, in Rome. It passes through England, France and Switzerland before entering Italy at the Great St Bernard pass or the Col de Montgenèvre.
The Italian leg leads through the southern Alps, the Apennines and the hills, the forests, olive groves, vineyards, hilltop villages and farmsteads of Tuscany and Lazio. The essential stops were – and remain – the great churches visited by the pilgrims and the pilgrim hospitals such as:
• Saint Michael’s Abbey, better known as “Sacra di San Michele”, built in the 10th century, where the boulders of the rocky mountains blend into a single body with the whole of the basement, stairways and buttresses;
• St. Martin’s Cathedral of Lucca where, on a marble pillar adjacent to the Tower, there is a carving in the shape of “Labyrinth”, a symbol of the Francigena;
• the ornate Romanesque-Gothic Siena Cathedral, contains numerous masterpieces from every epoch. A work that in many respects is exceptional, is the floor, “the most beautiful… largest and most magnificent… that ever was made” in the words of Giorgio Vasari, art historian and artist of Italian Renaissance art.

The Via Francigena tour is designed for those who intend to embark on the sacred journey, exploring the ways in which the ancient rites of pilgrimage might inspire modern equivalent for today’s traveller. By taking the Via Francigena, pilgrims are offered the opportunity to restore the spirit, mind and body.


LA QUOTA NON COMPRENDE: What is not included in the tour cost
Beverages (wine, beer, bottled water or soft drinks)Passport fees, visas, and visa photos as required • Other items not specifically mentioned as included • Optional Travelers’ Protection Plan (unexpected events before or during a trip may leave you with cancelled plans, lost luggage, or unforeseen medical expenses) • Guide and Driver tips are left to your discretion