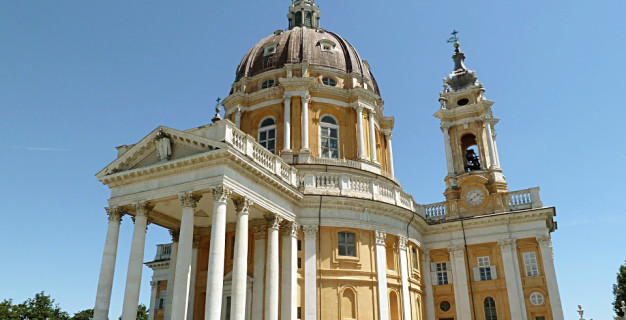 A DEEP SENSE OF WONDER

Turin is a true jewel of the Baroque, which marked the city’s cultural flourishing.
The talented Baroque architect and theologian Guarini planned the Church of S. Lorenzo, symbolised by its soaring dome which describes an eight point star within a perfect octagon. Guarino Guarini’s architectural daring must be seen in relation to the virtuoso use of structural techniques common to the century, aimed at “stupefying” (the stunned marvelling of the faithful), almost to make manifest the miracle of divine logic through the human technical “miracle”.
The architect Juvarra was behind the styling of the Church of S. Filippo Neri, Turin’s largest. Then there are two churches with twinned frontages – S. Carlo and S. Cristina – forming the backdrop to Piazza S. Carlo, one the finest squares in Europe, on account of its grandeur, its size and the symmetry of its buildings. The Our Lady of Consolation Shrine displays votive offerings donated by the faithful in thanks for miracles performed. Taking the quaint rack-tramway you reach one of the most important places of worship in Turin: the Basilica of Superga. This sumptuous church, from which a unique view of Turin and the Alps can be enjoyed, is one of Juvarra’s greatest masterpieces.
The Baroque also characterizes the 15 Royal Residences in and around Turin – such as the Royal Palace of Venaria Reale, Racconigi Royal Castle, Stupinigi Royal Hunting Palace – that bear witness to the Savoy monarchy and constitute a unique treasure declared a World Heritage Site by UNESCO.

Turin is a city that was born in the Baroque style of architecture and at grew to become a city of sensational architectural monuments. Explore the
spiritual and royal history of Turin with a tour of some of its most significant churches and palaces.

Royal Palace of Venaria Reale
The Palace was designed and built between 1658 and 1679 on the plans of architect Amedeo di Castellamonte, commissioned by duke Charles Emmanuel II, who needed a base for his hunting expeditions in the heathy hill country north of Turin. The name itself derives from Latin, Venatio Regia meaning “Royal Hunt”. The size of the complex structure is 80,000 m2, including the park and the historic village of Venaria.The Palace later underwent numerous modifications that led it to its present appearance. The Galleria Grande, the Chapel of Sant’Uberto and the Citroniera are masterpieces, designed in the first half of the eighteenth century by the brilliance of Filippo Juvarra.

The Basilica of Superga
It was built from 1717 to 1731 for Victor Amadeus II of Savoy, designed by Filippo Juvarra, at the top of the hill of Superga. This fulfilled a vow the duke (and future King of Sardinia) had made during the Battle of Turin (1706), after defeating the besieging French army. Below the church is the Royal Crypt, with the tombs of many of the princes and kings of the House of Savoy who were buried here. This church by Juvarra is considered late Baroque-Classicism.